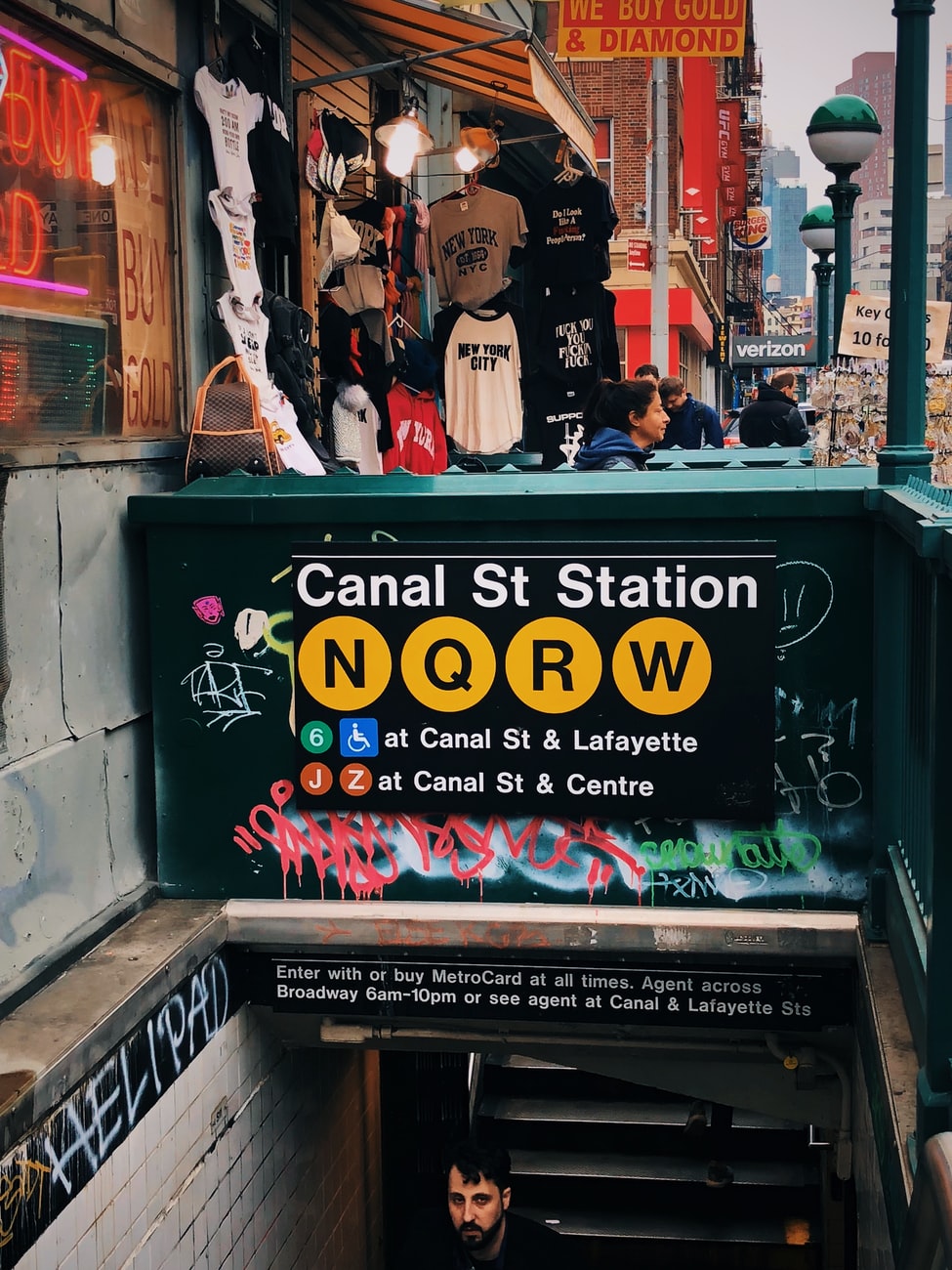 “As long as there is something to be said in the ghetto, there will be graffiti.”

Street art is an evolving artistic language that has grown out of graffiti culture to communicate socio-political and territorial values, while also establishing urban subcultures. Graffiti culture originated in the Bronx during the 1970s, created by teenagers in low-income communities (Ley et.al., 1974), revealing a way for oppressed youth to generate a voice for themselves. Working as an urban language by creating symbolic ‘tags’ and ‘throw-ups’, graffiti was used to establish power and claim territory (Dietch, 2011). As an incredibly popular tool, graffiti quickly spread across the world with the help of other rising technologies and mass media, eventually evolving into a number of different forms and subcultures, like skateboarding culture and rap music. Still prominent around the world today, street art (urban art) is an international visual language.

Times were rough and raunchy in New York during the 1970s. Rent was low, crime was high, and human sexuality was the topic of every conversation. People were rampant and rebellious, and for the first time in history, everybody was in the conversation. Meaning, ethnic boroughs were everywhere in New York – people of colour were building their own representation and actually taking financial benefit from it. As the economic structure broke down, so did the relationship between high-brow and low-brow systems, forever altering the definition of taste and culture. New Yorker’s were acting out and the city took to the streets to speak their truth.

Marginalized communities were marching and brawls were breaking in the streets, LGBTQ communities were finally beginning to open their windows to let in light without the fear of consequence, and pop culture would soon be infecting the people of New York. Unfortunately, at the same time, gang violence rose beyond belief. With all of New York finally existing as a near even playing ground economically, territory battles began. Hence, the birth of graffiti.

The urban language was most effectively used first by teenagers and young adults in the Bronx to establish gang territory and hierarchy (Dietch, 2011). Coming from low-income communities with high crime rates, the first graffiti artists were, arguably, teenagers who felt silenced or controlled by their circumstances. Whether it be a circumstance of initiation or a cry for acknowledgment, it didn’t take long for spray paint to manifest into ‘tags’ and ‘throw ups’ (Dietch, 2011). Soon the rebellious form of communication grew into an identifiable system of symbols that infected all of New York.

Tags were spread across buildings, subway stations, bridges, and other highly populated urban areas. Each tag represented a group or an individual, and was used to claim territory or send messages between gangs (Ley et.al., 1974). At the same time, graffiti artists were using their tags to send messages to authorities or the institutionalized oppressors in their communities (Ley et. al., 1974). As a result, everyday people were constantly exposed to gang culture and quickly grew to associate such culture with street art. As graffiti garnered attention from the authorities and media outlets, tags evolved into pseudo-signatures (ley et.al., 1974). Acting behind pseudo-signatures allowed graffiti artists to do whatever they wanted without the fear of consequence.

Graffiti artists used the power of anonymity to acknowledge and challenge social values, acting against hegemonic issues. Much similar to modern-day culture jamming, graffiti was also used to subvertise by vandalizing things like billboards, campaigns, political posters, and propaganda. At the same time, the direct defamation of hegemonic values acted as a form of communication in itself. Graffiti was both a weapon and a tool. As McLuhan (1964) said, “the medium is the message,” which speaks highly in regards to street art as visual communication. As a form of criminalized communication or speech, Graffiti worked to prompt heurism within those inspired by the rebellious art form, raising questions both in purpose and form.

Graffiti grew prominent around the world, taking on different forms within urban communities. The widespread of graffiti was the result of harnessing other communications tools, such as photography, as well as using the aid of digital mass media to share the urban art form (Deitch, 2011). The rise of technology and digital connectivity allowed stories and images of graffiti to be shared instantly and widely. Unfortunately, graffiti was more often than not leaking into mass media on the evening news covering violence and vandalism. As the years moved on, and the graffiti bled into the 1980’s and 1990’s, it began reaching neighbouring countries.

As artists around the world with different cultural values adopted the visual language it became, “… a measure of [the artist’s] relationship to the urban experience” (Dietch, 2011).

Still, in relying on photography and mass media to help build momentum, there is a reliance that exists between street artists and media artists. Graffiti artists must create anonymously, and documenters must follow publicly: this is an urban conversation.

Through the help of mass media, and the adoption of urban art, influential subcultures were born, such as street art, rap music, and skateboarding culture. Street art came in the form of installations, posters, and murals (Dietch, 2011), all of which were used to convey the ideas and values of the artist. While postering pre-dates graffiti, examples being war propaganda or even Martin Luther posting the ninety-five theses during the renaissance (Dietch, 2011), the music subcultures that enhanced post-graffiti origin relied heavily on the new power of posters and ‘bombing,’ which means to hit up many places at one time with the same tag, an exaggerated effort to be seen (Bynoe, 2006).

Posters, stickers, badges, and tags were popularly used to promote rising artists who performed in underground venues. Still relying on the trend of anonymity, these posters or tags were used to create the illusion of an exclusive music subculture, such as rap music (Dietch, 2011). According to Bynoe (2006), the first rap artists to use graffiti to self-promote were located in Philadelphia. Known as Cornbread and Cool Earl, the honourary fathers of graffiti. The duo created the concept of ‘bombing.’ Also known as, prolific writing of single names or messages. Knowing that graffiti was a criminalized form of self-expression, the artists used bombing to generate press, which would eventually lead to their fame.

At the same time, the first recognized rap song was brewing in an underground club in the Bronx. “Rapper’s Delight” was created by a group known as The Sugarhill Gang in 1976. Its structure was similar to slave chants, in which there were a call and a response, a structure that would go on to become the founding structure of rap music. It is important to note that slave chants were used as a method of communicating without informing slave owners. This form of communication arose under oppressing conditions and manifested into a form that was appropriate for modern-day oppression of African Americans, such as The Sugarhill Gang. Inspired by the newfound creative energy in New York, as well as history, rap music was born. Rap music today is still a way of communicating as marginalized members of a community.

Skateboarding originated in 1950’s California. Coined by surfers, the sidewalks became the new wave. As skateboarding began to grow in popularity, the trend was quickly viewed as criminal to minimize trespassing onto ‘skateable’ turf. Regardless of the laws that prohibited skateboarding in certain areas, lined with the growth of graffiti and rap music, skate culture was rising. Skateboarding was abrupt and dangerous, and during the early 1980’s, it was unconventional. As Dietch (2011) says, “in short, walls, stairs, railings, curbs, trash cans, benches, and the like become surfaces to cover with wheels in place of spray paint” (p.23). In comparison, graffiti and skateboarding resist the status quo by defiling the public domain and creating their own personal agenda in the process.

Skateboarding culture ran in sync with graffiti as tags spread from back alleys and subway stations to the skate decks and clothing. The turf that skateboarders shredded were covered in graffiti, and so were the boards they rolled on. Soon skaters were representing their own groups, gangs, or designs on their skateboards. The rise in popularity transferred skateboarding into the realm of recognized sport, and exists today as one of the athletic leaders in “the world of fine arts, photography, graphic design, music, and film. Skateboarding has had a dramatic influence on the world” (Fairey, et. al., 2011).

The Prodigious Impact of Teenage Revolt

Arguably one of the most impactful art movements in human history, graffiti culture runs parallel to rap music, skateboarding culture, and all other urban art. All known today as different streams of street art, the conversation is nearly infinite in the ways modern oppression changed the creative world. Teenage revolt was at an all-time high during the 1970s and so a voice was created to speak for those who were not being heard. Today, graffiti exists in nearly every city in the world. Surely, the graffiti movement will define our century in history as walls will forever be stained with our beliefs, our dreams, our ideas, and our stories. A permanent battle cry on the pages of history, in a back alley in the Bronx, our story remains, “WE WERE HERE.”

White, Edmund. “Why Can’t We Stop Talking About new York in the Late 1970’s?” New York Times. Retrieved from https://nyti.ms/2I87KdI