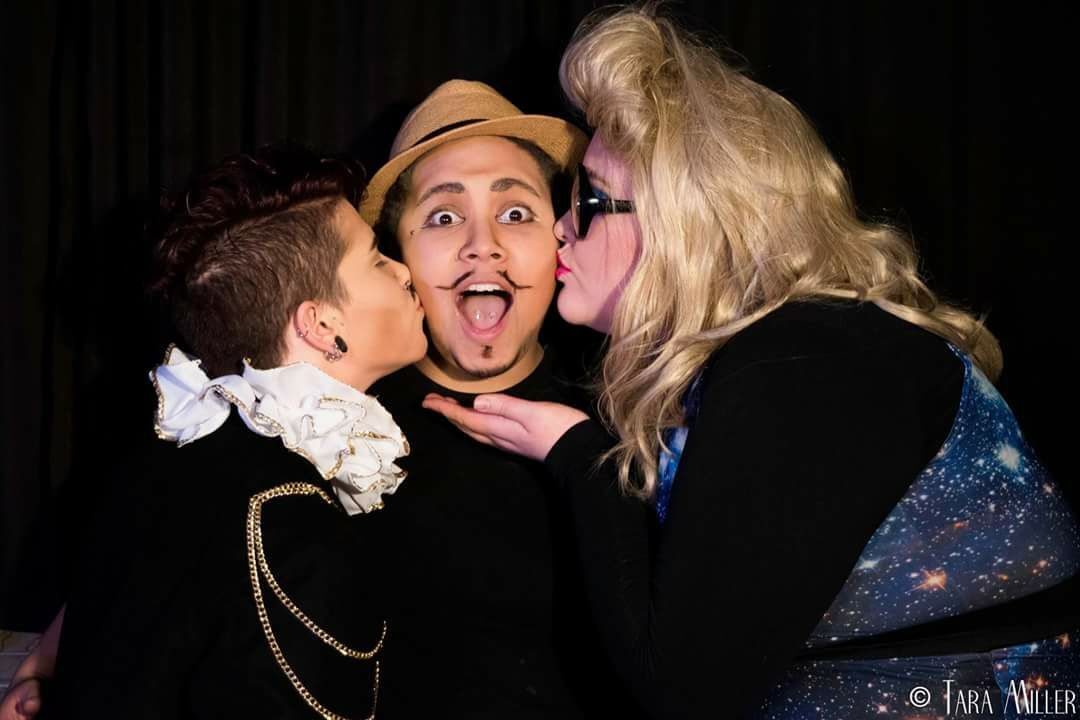 I met Dev, a bi-racial, non-binary, drag performer, at a University of Calgary Fashion Network event. During the event, they sat on a panel speaking about race and intersectionalities within fashion, beauty, and performance industries. I was incredibly inspired and in awe of the different perspectives they offered. As well as their ability to speak about grand concepts in ways that were affirming and valuing of the people in attendance. After the event, Dev sat down with 10 at 10 to speak about their identity and presence within their community, within Calgary, and within their relationships.

Growing into your identity is time-consuming and non-linear. There is no such thing as deterministic evolution when grappling with the complex world of intersectionalities. Dev expressed their journey as being a web; as a collection of experience that was interconnected and woven in patterns that took years to uncover.

When asked to share their journey first in gender identity, Dev said,

“Most recently I came out as non-binary. I have been queer for some time, in fact, I have always identified as queer. Always feeling uncomfortable with the term lesbian, and I never really understood why. I often thought, ‘you love who you love and the rest shouldn’t matter.’ However, people still perceived me as what they wanted to.”

Returning to their younger years, Dev and I began to speak about the foundational experiences that shape identity.

Dev shared with me her struggles with early relationships, saying that,

“I went through a really dark time. It was pride, my partner left me for someone who I had a lot of different ethical values from, which left me very distraught. Someone who I trusted broke my values very intensely. Also, my cat died, and finally, it was the anniversary of my grandmother’s death. So it was a lot to experience during a two week period. To top it off, it was incredibly busy time of year, with preparations for pride and other events. I was completely burnt out.”

As the list of setbacks grew, so did Dev’s faith in her ability to push through. With deep sincerity and empathy, Dev shared that the result of her piling setbacks left her feeling suicidal and eventually led to an attempt to take her own life. They describe the pivotal day in their life,

“I remember the day specifically. I had attempted to take my own life, then I called my mom and we just talked. She told me that I should take it easy. Then I told her, ‘you know what, I am working tonight. I am going to get into drag. I just need to get out and not be in my house.’ And the moment I got into drag, I went from being in a place of wanting to take my own life and be gone to being extremely happy. Instantly, I was in a very good place.”

As life-saving as this moment was, it still left Dev with deep unclarity about their mental well-being. Battling with the ideas of possibly being bipolar to eventually grapple with the fact that their discontent in life was directly related to the fact that they were not being authentic for themselves. As inferable, this journey did not come without battles.

“I grew up in Montreal, a place where there is no one championing trans rights of even possessing the knowledge that I do now… If I was younger, with the knowledge that youth have now, I probably would have transitioned. Instead, for me to feel comfortable now I embrace presenting very masculine while still enjoying the things that I enjoy – even if they are considered feminine.”

As we communicated more, Dev mentioned how they slowly introduced themselves and their community to the identity they are today. Importantly, Dev noted that learning about who they were in the world required tangible labour to learn about different identities. In order to build the community that they needed when they were growing up, Dev established an event in Calgary known as Reverse Racism. The event brings non-white people, QTBIPOC come together to speak about their racial and sexual identities in an environment that promotes learning and safety. After this discussion, the contributors perform their art with a stage of empathy previously established in the opening conversations.

Race and Community in Canada

This effort is incredibly important considering that education about these topics is not readily available in public classrooms or heteronormative community areas. Perhaps, without recognizing it, Dev has become a significant role model and inspiration to youth and marginalized members in Calgary. Especially since their presence has created a unique, and much needed, diverse space in the city.

“Now, sometimes I make a special effort with students who are racialized because I know that I often needed to hear someone tell me, ‘you deserve to be here’ when I was younger. Now, I make sure to recognize the effort of those who participate and create their own art. I always validate, even if they need to take a break, I support that.”

Of course, Dev has encountered many feats that fall onto the shoulders of her racial identity as well. When we spoke about what it was like to grow up mixed-race, it became very apparent to us that our communities taught us who we were racially. Furthermore, the cities we live in determine who we are when we walk on the sidewalk. When Dev relocated to Calgary after growing up in Montreal, they said it was a complete shock to be stopped on the street and confronted bluntly about their race, expressing,

“I grew up in Montreal, which was different for me because I had very different struggles. For example, I didn’t grow up in all white spaces like many people here. Actually, I never really thought that race was a factor in things. Still, I always had this feeling I was never black enough because I was told that. At the same time, in other groups, I was never white enough – obviously. There was a lot of struggle there with that for a very long time.”

However, Dev recognizes now that there was an astounding amount of institutionalized racism, especially in schools that could market their “troubled” and usually Black youth. Including themselves, who was often labelled problematic for their natural, childlike behaviour. During these confusing times, Dev, who loves and appreciates her mother deary, often fell short when trying to speak to her about issues of race. Largely, this is due to the fact that her mother is White. Dev and I spoke about this for a long time, expressing the way racial differences within a family can bear a significant effect on growth and maturity into adulthood – especially when a non-Black parent infantilizes Blackness.

Dev continued by expressing the tension they felt internally because of their mixed-race identity, saying that, “I had the mission of creating more diverse spaces, but I really struggled with imposter syndrome and thinking that I wasn’t black enough to speak up. Yet, I was still treated differently in workplaces and made aware of the hierarchy of race when working in Calgary. If I wanted an effective change or to be heard, I often had to ask one of my white coworkers to speak on my behalf.”

As our conversation came to a close and Dev shared their experiences, they closed on the note of space. The conversation around space has been very prominent in diversity conversation lately. Essentially, space equates to a physical place that allows diversity to exist without being spectacularized and without being Othered. At the same time, space refers to the ways that people can exist in the world as themselves without fear or consequence.

“I still struggle with being able to take up space, which is something I feel like I am only able to do because I have power now. I have a voice that has done something. Now I am trying to make the space for others. However, I still take steps back and allow others to exist in space without trying to take over it. I think this relates to growing up and being able to join things, like clubs and sports where I could be loud and present. This created someone who was met with allegations then of being too loud. So now I question myself all the time, and I wonder if there is someone able to articulate this better? I guess I have always been in the grey with these things – with my gender, with race relations, with how I feel about myself. Regardless, I know now that I want to take up space so that I can help make space for others.”

Common to conversations such as ours, Dev and I could have spoken for hours about the realities of marginalized identities. However, as our time came to a close, Dev concluded with a brilliant final remark that they plan to travel the world and engage with people who think differently, saying that, “I don’t want people to feel the exclusion or racism or anything that I have been feeling, and the only way to do this is for me, as I am, to just show up. So that others do the same.”