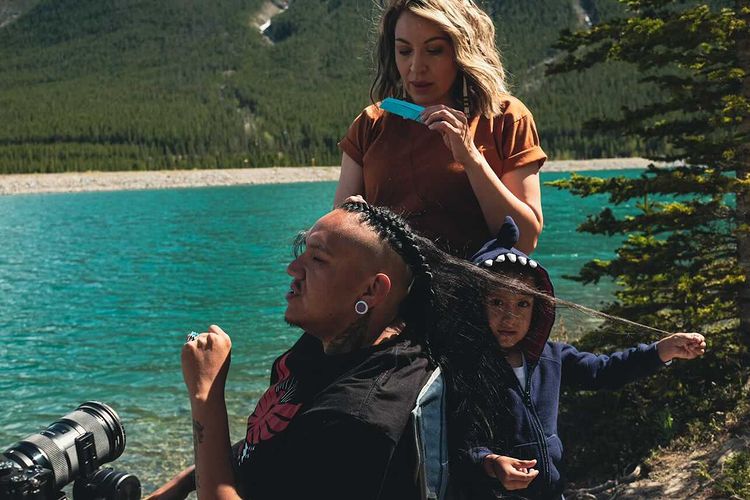 “They wanna take my culture / That’s an act of war”. The first line of Indigenous rapper Drezus’s latest hit single “Bless” immediately sets the tone for his striking new track.

Directed by Vince Raquel, “Bless” is set in the rural mountains of Alberta. With the depiction of Drezus “smudging up” with relatives, the invigorating anthem adds an apparent power to the visual. The track gives nod to Drezus’s Indigenous roots with the use of heavy drums, produced by Superville (Freddie Gibbs, BJ The Chicago Kid).

Debuting in June of 2021, the song has already amassed over 65, 000 streams over online platforms.

A Few Questions With Drezus

10at10: During the creation process for this song, what were your goals in mind?

Drezus: I feel aspects of my culture are misunderstood and looked at as “dark”. But beneath the darkness is an opportunity for healing and learning. Starting from the bottom and making something from nothing. That’s what this song is about.

Referring to the Indigenous Peoples’ traditional ceremony “Smudging” is to purify the soul of negative thoughts and feelings. With the relevancy of today concerning the monstrous acts by the Catholic churches and Canadian federal government in residential schools, the song “Bless” can be advocated as a conservancy of Indigenous culture.

Upon the topic of “Smudging”, Drezus claims since making major changes to his life, he had to find alternative ways to heal. “Smudging with sage or sweetgrass picked by my mother is everything to me. It cleanses my energy and puts me in a frame of mind where I am mindful of all my blessings.”

10at10: Was there a lot of consideration for the setting of the music video?

Drezus: I wanted to be close to the mountains because their energy is so powerful and it’s our favourite spot as a family. [As a result] in the song, I’m giving thanks for what we got. I wanted to be in a place that had, “Earth, Wind, Fire and Water”.

There are show no signs of slowing down for him with a new collaboration with another Indigenous artist named Dakota Bear. To hear “Circles“, stream anywhere music is available.

As one of Calgary’s premier rappers, Drezus has continuously set the bar with epic visuals and effortless rhymes on deck. As he builds his reputation of being a role model to young Indigenous people everywhere, he emphasizes to ” be yourself, love hard and work harder.”