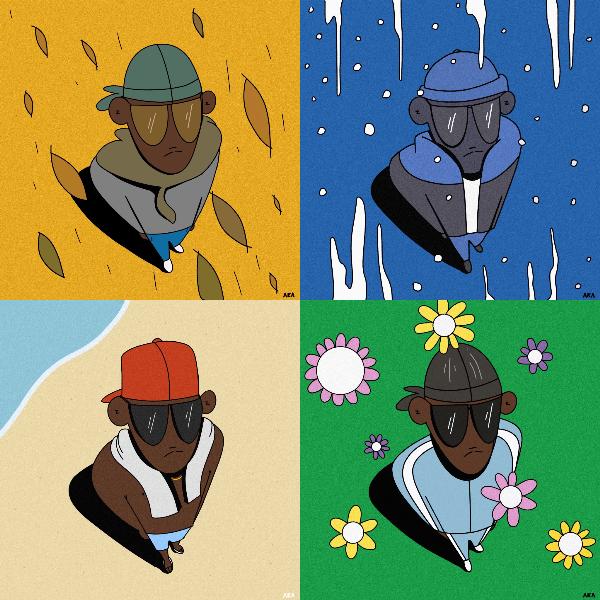 Since his “Bino Mishop” EP in 2018 and then onto his prolific singles such as 2019’s “Feel Like A King“, and “Fashion” released in 2020, Mino Ceaz has gained a barrage of fans and peers alike in the Canadian music community.

The Egypt born, Calgary raised rapper has become a staple in the trap/hip-hop community in Alberta. Bringing a certain essence of realism and in-depth topics to the forefront of his music, whilst still incorporating high energy instrumentals and fresh 808’s (drum patterns) to truly captivate his listeners. The young rapper took a light hiatus between 2020 and 2022 to develop his signature sound but also take a step away to focus on his personal life. Now in 2022, Mino Ceaz is back and ready to showcase his skills as an emcee of top tier levels once again.

“Mino Ceazon” acts as the young artist’s first album. Containing 13 songs, and featuring several other Canadian artists such as Billy Bi$hop, Carlson the.Me$4aih and Misho GLK.  When discussing the inspiration for the project and how it came to fruition, Mino stated that “Honestly, I don’t know. There wasn’t really anything specific, I just felt like I had been out of the game for a while and it was time to show people what’s really good. It’s my season and my name is Mino Ceaz, so it just made sense to call it ‘Mino Ceazon’.”

The intro track “FALL INTRO” is a brief statement from Mino about how he’s going to carry himself throughout his album. It leads directly into the second track “DEMONS“, having the young rapper reminisce on his lost loved ones, some of the actions he took during his hardships and self-reflecting upon his status in life currently.

Thirdly is “READY, SET” a darker toned, boastful track, featuring Misho GLK. The two artists both describe their attitudes going through life and what it takes to be able to handle the trials and tribulations that they encounter. Fourth is “SOTJ” a bass heavy track, having Mino deliver a quick-witted flow and story-driven narrative to his listeners. Discussing his confidence amongst his adversaries and how he handles the pressures in the rap game.

Next up is “WINTER INTERLUDE“, another short statement from the rapper talking about his ever evolving work ethic. It acts as a bridge to the next track, “IF YOU DIDN’T KNOW”  produced by another Calgarian native Lazy Beats. The song depicts Mino discussing his own values and aspirations within music while demonstrating his position in rap currently according to himself.

The young rapper admits he can be his own worst enemy when it comes to making music, attempting to smoothen out the most finite details. When elaborating on the process of dealing with obstacles during the album’s creation, Mino said “I had a few, and it was myself honestly. I’m probably my biggest critique, and I’m really hard on myself. I had been recording since the pandemic and everytime I was supposed to drop a single or an E.P I stopped the release, I just wanted things to be perfect.”

The seventh track is “SAID IT, I MEANT IT” featuring Calgary’s own trap aficionado Billy Bi$hop. The duo each convey their unique cadences over a dynamic instrunmental, serving up an enticing hook and describing their lifestyles, while also commenting on the lavish activities they partake in. This song also served as the second single for “Mino Ceazon“. Next is “LOWKEY” having Mino evaluate his emotions towards money and the city he’s from, all while captivating the audience with a bass filled, flute featuring melody.

Ninth is “SPRING INTERLUDE” the second to last interlude on the album, a quick uplifting comment by Mino himself. Which transitions into “NEW FLOW“, a track delivering Mino’s signature rap style. Regarding his own description of his sound the young rapper mentioned that “I make lyrical bangers. I make dope catchy hooks, and then I just go crazy on the verses. I know how to have fun but then also say something meaningful at the same time.”

The final three tracks are “SOUND LIKE MONEY” featuring Carlson the.Me$4aih. An ode to creating revenue, spending money and dealing with problems that manifest when handling financial problems. Next is “UH HUH“, serving as a tempo switch for the album, having Mino rap over a catchy drill instrumental to end the project. The track also served as the lead single for the project. Lastly is “SUMMER OUTRO” which concludes the album’s theme of interludes being fall, winter, spring and summer, fully encapsulating the entirety of “Mino Ceazon“.

What’s Next For Mino Ceaz?

When reflecting on the album, Mino explained that making a true impact was key for him. Going on to state that “I just wanted to let the city know that I’m here. I want my name to be the first name that pops into someone’s mind when they think of YYC hiphop. Mino is here and I’m here to stay. And to all my fans, yall just gotta follow me on the gram and Twitter to keep up with Mino related news. I’ll be dropping visuals from time to time to promote the album, but now I’m just focusing on singles and being the best artist I can be.”

“Mino Ceazon” serves as a great stepping stone in the rappers discography. And with a revamped perspective on quality and a focus on bringing new styles of music to his platforms, Mino Ceaz stands out as a hard-working and determined artist, ready to take on any obstacle that may interfere with his crafts and vision. Check out the “Mino Ceazon” on all major music streaming services now.

Like this article? Check out more music pieces here!  https://10at10.ca/category/music/