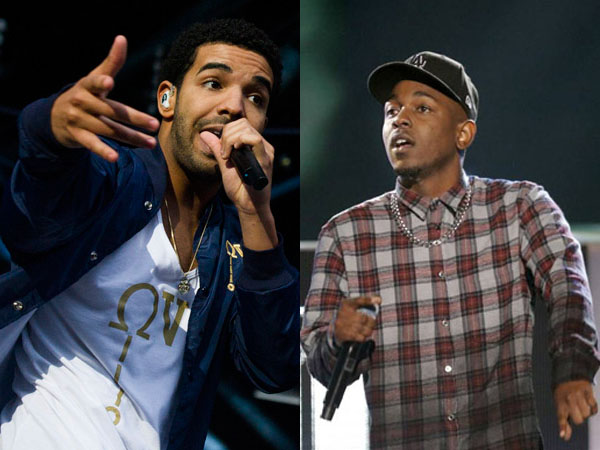 The Army of Two: Drake and Kendrick Lamar

Since the inception of rap music, there has always been two distinct emcees who are a notch higher than the rest. The 80’s belonged to New York wordsmiths Rakim and Big Daddy Kane. In the 90’s, a bitter feud between California spitter 2Pac and New York rhymer The Notorious B.I.G. became the most prolific rivalry hip-hop to date. Unfortunately, for both 2Pac and The Notorious B.I.G., the bout between the two heavyweights of rap ended in death by drive-by shootings, and the debate on who took the crown in that battle is still ongoing.

As rap shifted into the next millennium, the 2000’s were witness to another budding New York matchup that took the rap world by storm. Brooklyn emcee JAY Z and Queens lyricist Nas found themselves entrenched a war of words, trading scathing diss records back-and-forth. The reward? To become the undisputed king of New York hip-hop. Although the beef was an exciting time for rap fans, things between JAY Z and Nas calmed down during the “I Declare War” concert in 2005. Both rappers stood in front of a raucous New York crowd, declaring that their duel was over.

A few other feuds in the 2000’s, were notable but not on the level of the JAY Z/Nas squabble, such as the war between Southern emcees T.I. and Ludacris and a West Coast/East Coast battle between The Game and 50 Cent. None of these beefs would compare to what would come next.

Rap moved into the 2010’s, the digital era of music, where music became much more accessible through illegal downloading and P2P sharing sites. The genre was also moving towards a more softer, sensitive sound, much to the dismay of older rap fans. Among those sensitive rappers is Toronto-born rapper Drake. The 28-year-old has enjoyed a very successful rap campaign since the late 00’s, with many hailing him as the most prominent figure in modern-day rap music. With his chart-topping songs, catchy hooks, and sultry voice, the Canadian wunderkid has already made his mark in rap.

South of the North American border, another stalwart emcee would create his own path of dominance. Kendrick Lamar, from Compton, CA, developed an ability to craft thought-provoking music without compromising his musical originality. A lot of modern day rap fans are considering Lamar the greatest rapper of this generation off the strength of his major-label debut album good kid, m.A.A.d city (2012) and, most recently, his sophomore album To Pimp a Butterfly (2015).

Both emcees are neck-in-neck in terms of skill and comprehension. Drake is more of a radio-friendly, marketable artist, and when it comes time to rap, he’s also one of the sharpest writers in the game: “They say the shoe can always fit, no matter whose foot it’s on / These days feel like I’m squeezin’ in ‘em / Whoever wore ‘em before just wasn’t thinkin’ big enough / I’m ‘bout to leave ‘em with ‘em.” These lyrics taken from his 2014 song “0 to 100” explains Drake’s need to fill the empty legacy that the greats before him left behind. It proves that Drake’s lyrical prowess should never be questioned. Similarly, in Lamar’s situation, the will to become the genre’s best emcee is on full display: “And that goes for Jermaine Cole, Big K.R.I.T., Wale / Pusha T, Meek Millz, A$AP Rocky, Drake / Big Sean, Jay Electron’, Tyler, Mac Miller / I got love for you all but I’m tryna murder you niggas / Trying to make sure your core fans never heard of you niggas / They don’t wanna hear not one more noun or verb from you n*****.” This lyrical jab taken from Detroit rapper Big Sean’s song “Control” exercises Lamar’s vicious assault on all the big-name rappers from the new generation. Lamar intends to become king of the hill and will show no mercy.

Regardless of the “friendly” competition, Drake and Lamar are relatively tolerant of one another, having shouted each other out in numerous interviews and during live shows. Both rappers have been featured on each other’s albums, including Lamar’s guest verse on Drake’s “Buried Alive Interlude” from the 2011 album Take Care and Drake’s feature on Lamar’s “Poetic Justice”, from GKMC. Recently, the push for hip-hop supremacy has been on full throttle. 2015 has already seen both Drake and Lamar release full-length projects to widespread critical acclaim. Drake’s If You’re Reading This It’s Too Late showcases the rapper’s bravado and braggadocio demeanour that isn’t typically the Canadian emcee’s muse. Lamar’s TPAB is an all-out musical assault on the trials and tribulations of black people in the United States. Both projects are extremely different but are needed.

A war of words is the prime destination for both Drake and Lamar, as they trade subliminal after subliminal. The real test for both of these emcees is whether their individual impact can reach the next generation of rap fans. Like most famous rappers, they will eventually get older, and with age comes greater responsibility. For now, rap is in a great place because its top two artists are going at full speed and not stopping. Each emcee has their own core following, yet also have a circle of non-believers around them.

What remains to be seen is who out of the two will be able to extend their time on the top successfully. Right now they are both killing it, but in a musical landscape that changes to drastically, so often, who knows who will be considered the greatest a year, or even six months from now. For now, we can enjoy the spectacle of the current times: it’s not everyday that rap gets to see two lyrical heavyweights do battle in a fury of lyrical jabs and punches. And one thing is for sure in all this: Drake and Kendrick Lamar are here to stay. They might not be on top forever, but they’ve both established themselves as two of the best in recent memory.