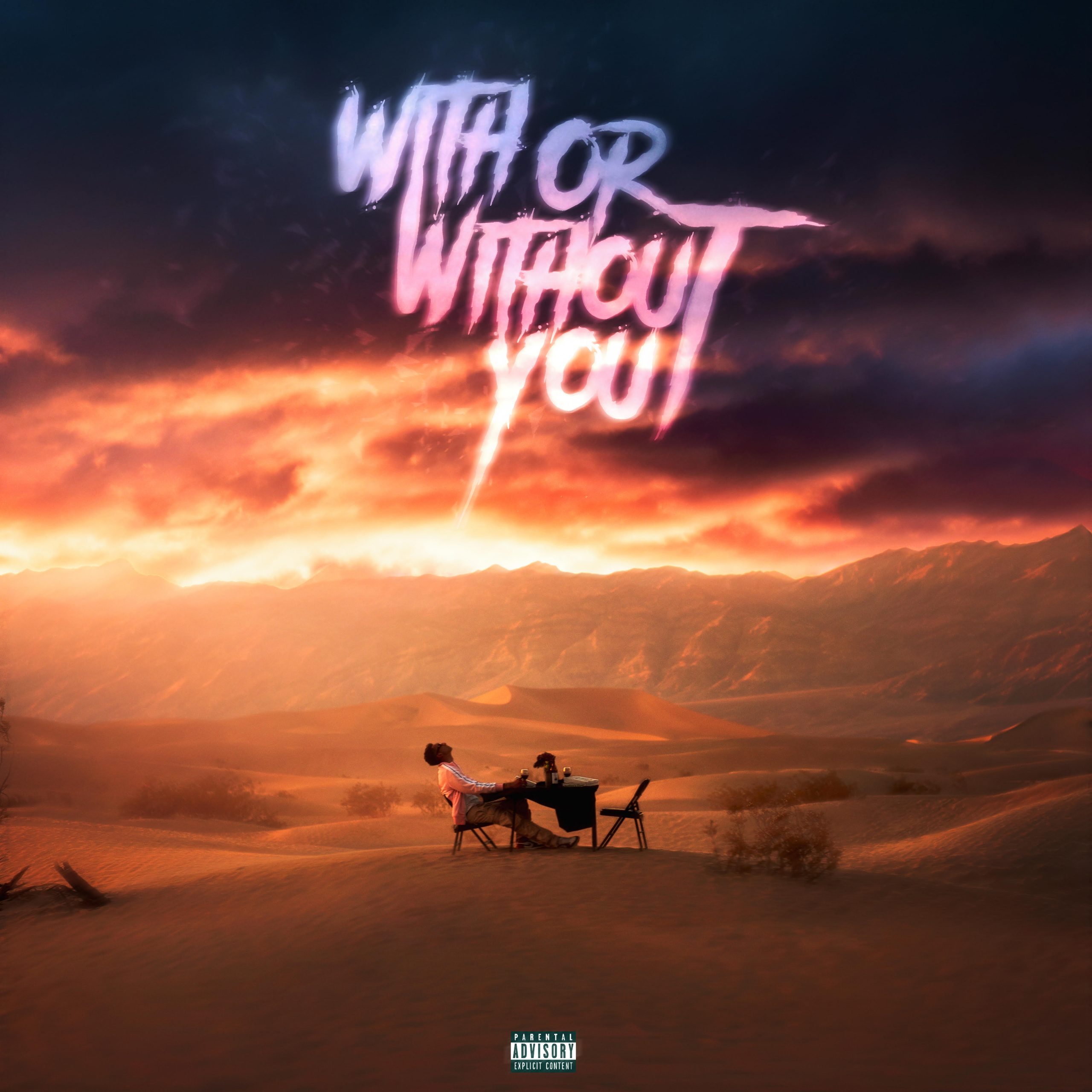 From beginning his music career with high profile singles such as “Flight Back” and “Sunset Blvd“, Kam Prada strives for extreme quality with each release. The young Calgary-based artist has consistently honed his signature sounds, crafting a musical style that carries an essence of pop music and emo rap. A new age sub-genre dominated by artists such as The Kid Laroi and 24kGoldn. With Kam’s intensity towards his music showcasing in his songwriting capabilities and more, his quality filled discography has evolved yet again.

With thousands of views on hit music videos like “Fiji” and “Woah“, and countless praise from his fans and peers alike, Kam unleashes his debut album. “With Or Without You” is the young artist’s first album, released independently. The project contains 13 songs with features from Kayam, Pressed, Rarin and Tommy Ice. During your listen you’ll observe themes of heartbreak, passion and triumph.

While further explaining his reasoning to drop an album currently, Kam expressed that “I think just where I was at in my life at the time of writing the album and trials and tribulations from the past two years played a huge part in the inspiration. I talk about relationships, heartbreak, mental health, success, failure, proving people wrong, and more. I wanted to be able to create a body of work that captures the happy, fun, turn up vibe that I love to portray in my music and contrast it with the sadder more emotional records about relationships, heartbreak, and mental health.”

The introduction track “MADE 4 THIS” starts off the album with an immediate high energy feel. Furthermore, adding to the explosiveness of the song is Ardist Beats, a Philadelphia-based producer and Dojoantonio, Kam’s longtime friend and producer. While the unique instrumental plays, the young artist expresses his evolving confidence in his musical ability and the lavish lifestyle that accompanies it.

The second song is “LANESWITCH” featuring Pressed, a singer-songwriter from Qatar. On this occasion, Kam emphasizes the experiences of being in the limelight and being able to live a fast life both in a metaphorical sense and quite literally. The visuals for the track dropped only a day after the album and has already amassed over 4,000 views on YouTube.

Thirdly is “DND” a track which acts as a response to the negativity and doubt Kam has faced throughout his career. Alluding to individuals that may have crossed paths with him prior, but now correlate to a moment of education and enlightenment, rather than the bitterness others may feel in the same scenarios.

The fourth track off the album is “THIS AND THAT” also produced by Dojoantonio and featuring another Calgary-based artist Kayam. It has the popular duo explain the parallels of having friends with benefits. And discovering the outrageous feelings and antics that could ensue when exploring the tense situations that could occur.

Up next is “3AM” an interlude that takes the listeners on a journey. It has Kam describe a range of emotions he succumbs to once midnight approaches. Not only does it provide a tone shift for the album a few tracks in, but it showcases a more intimate and passion filled side to the young artist as well that may have not been perceived before.

Sixth is “PROBLEMS” a song that has Kam speak on dedicating his time and efforts into relationships. It has the young singer outline his more vulnerable side, that helps the track develop a melodic and warm aroma. Still sticking to his signature sound however, the catchy and upbeat tempo will have you nodding along while thinking about your own feelings.

Seventh is “LIKE THAT” a track depicting a more pop/punk essence than his usual bass heavy pop/rap influence. It displays a good sense of versatility that doesn’t completely separate itself from the album’s entirety. Kam teased 10at10 that “I have a music video for Like That which I’m really excited to release in the coming weeks. Also, we have a bunch of lyric videos and different types of visual content for the next couple of months. ”

The eighth track is another interlude “SOMEBODY NEW” that has Kam depressingly figure out that a previous lover has moved on. Which equates immediately into the next track “NEVER ENOUGH” having the young singer reminisce on past relationships and how it has effected his mentality going forward in his personal life and career.

Next is “LEFT ME FOR DEAD” which also draws more inspiration from the pop/punk genre. Debuting several ear-catching guitar riffs and an engaging hook which is sure to have any crowd stand to their feet. The track goes on to detail some of the steps individuals deal with when they go through break-ups.

FINALE AND THE AFTERMATH

The final three tracks consist of “HILLS” a song featuring Rarin and Tommy Ice. Releasing in late 2021, the track gained over a million streams alone and serves as a welcome addition to the album acting as an anthem for the young singer. What follows is “CLOSURE” a sentimental and personal song that has Kam speak on his failures and mishaps. More specifically on how all those different experiences shaped the man he is becoming today. And finally is “BORA BORA” another track that released in 2021 that defied expectations for Kam. The track was one of the first singles of his career and to this date, the party melody has totalled just under 3 million streams itself.

“With Or Without You” essentially reintroduces you to Kam Prada. It takes all the defining factors of the young singer-songwriter and translates them into a barrage of harmonies, emotions and quotes that can resonate with his listeners and more. Each song portrays Kam openly at his core, giving new listeners a chance to truly take notice of his vibrant sound and appreciate everything he has to offer.

Listen to his debut album now, out on all major music streaming platforms. Check out another article featuring Kam Prada here!