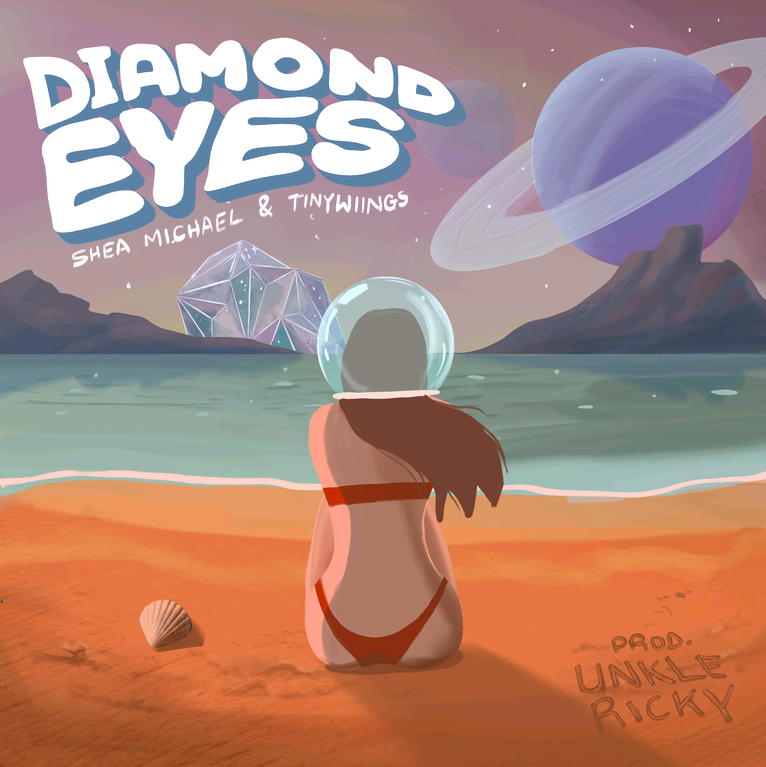 Serving up catchy hooks and expertly written verses is no new task to Shea Michael. And with the addition of Tinywiings, “Diamond Eyes” elevates to a whole different level. Creating an engaging track that is swift to bring you to your feet. Produced by Vancouver native Unkle Ricky, the song delivers an upbeat hip-hop/pop sensation filled with 808’s and synthesizers that blend effortlessly with both artist’s vocals. With ease, “Diamond Eyes” captures listeners everywhere with its replayability and song quality, with the track described as “A perfect song for a warm summer night of celebration.”

Could you describe the process of the creation Diamond Eyes?

Unkle Ricky and I began producing and writing Diamond Eyes in the summer of 2021 at Ricky’s studio in Vancouver. We wanted to make something upbeat and fun with hip-hop and pop elements combined uniquely.

How did the collaboration with Tinywiings occur?

After a couple of months of brainstorming ideas for potential collaborators, we both agreed that Tinywiings would be a great fit for the song lyrically and rhythmically. She is also the one who introduced us to each other! Thankfully, she loved the song and wrote an amazing verse that brought the entire song to life. It was recorded, mixed and mastered by me at my home studio. The three of us could tell this song was special. And so we took our time discussing artwork, marketing strategies and making sure we were ready to give the release the attention it deserved.

As an individual who collaborates with others frequently, what would you say are crucial steps when crafting a song with other artists?

I think one of the most crucial parts of a successful collaboration is listening to each other and being open to hearing other opinions. Often times I find myself butting heads to some extent with collaborators. On this occasion, everyone was really on the same page and everything came together pretty seamlessly. This mostly comes down to trusting that your collaborators are great at what they do, and allowing everyone to bring their own flavour to the song.

With all eyes on his next release, fans eagerly await his next drop. Till then, “Diamond Eyes” acts as a truly accomplished single, boasting a high quality instrumental and ear-catching vocals. Reminding individuals that Shea Michael’s music continues to get better and evolve over time, cementing his skills consistently and constantly within each song he puts out.

Listen to “Diamond Eyes” featuring Tinywiings now, out on all major music streaming platforms. Check out another article featuring Shea Michael on the website here! https://10at10.ca/music/shea-michael-black-prez-bring-peace-in-afterlife/