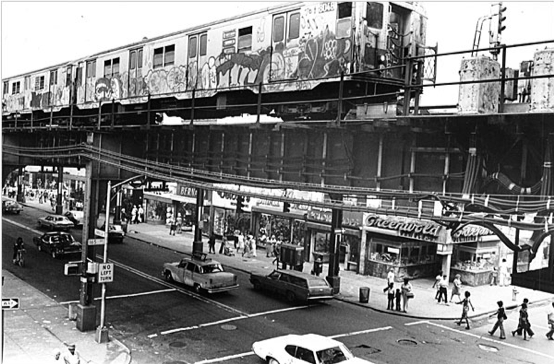 Back to the Beat

The origins of Afrobeat(s) and the fusion into present-day hip-hop.

The precise origins of hip-hop are often discussed and debated. Some are of the opinion that rap and hip-hop first developed in the late 1970s in The Bronx, a borough in New York City. At that time, the area was populated mainly by Black families – namely, those with Caribbean roots. These communities are described as a multicultural melting pot of new migrants, and others socioeconomically categorized as lower-class citizens. As you may already know, this environment gave way to numerous tensions amongst the marginalized groups. Therefore, with high crime, unemployment and school dropout rates, many were exposed to unfortunately treacherous living conditions.

But on the other hand, the young people of New York did more than simply internalize the negative effects of their surroundings. In short, the creative minds of the time turned real-life anecdotes into music and art as an outlet; eventually this gave birth to the hip-hop genre as we know it today.

Moreover, rap, hip-hop and their various subgenres are known as the most popular genre of music! Through the initial struggles of the OG pioneers of the music style, such as Tupac Shakur, The Notorious B.I.G., Nas, Wu-Tang Clan and A Tribe Called Quest to name a few, hip-hop has fought its way up from being the almost-taboo, rebellious product of a revolutionary counterculture to a prevalent element in mainstream media all around the world!

With all that being said, there is another opinion that the legitimate ancestor of today’s hip-hop dates back way before 1970 New York City. I believe that the initial foundation was established back in the day in the continent of Africa, and I mean way back to when the first humans roamed the motherland. The concept of rhythm, or particularly, percussion brings to mind the traditional African “talking drum,” as my Nigerian relatives call it in English. The talking drum is a double-sided instrument made to imitate the tonality of human speech. The pitch is altered by squeezing the ropes that connect the two drumheads while striking with a curved drumstick, or the hand.

At the same time, from African country to country, each one regards the instrument uniquely. To illustrate, writer for the Smithsonian Magazine, Michael Kernan quotes Michael Atwood Mason, an anthropologist at the Smithsonian’s National Museum of Natural History in a June 2000 interview, “Batá drums imitate the tonal language of Yoruba,” (this being one of the three main languages spoken in Nigeria), “…Any Yoruba syllable has one of three tones in a fixed relationship with each other, and the batá imitates them.” Also, Tim Orgias, the writer of a blog titled InRhythm explains, “It is widely believed that the Djembe has its origins with the “numu”, a social class of professional blacksmiths from the Maninke people of Western Africa around 1300 AD…For the most part, African history isn’t written down, but is passed down through stories and traditions,” Orgias continued.

Incidentally, my family is not one to shirk tradition as we have an authentic talking drum hanging on our wall.

Next, let us fast-forward back to modern-day, the 2010s. You may have heard, or even be a fan of some present-day African beat’s use in popular songs without your knowledge. If you’ve listen to Drake’s “One Dance” from his fourth studio album Views, then you already have a taste of the fusion music genre known as Afrobeats. Collaborating with British singer Kyla and Nigerian singer Wizkid, the song became Spotify’s most-streamed song in 2016, with over one billion streams. This music style is not to be confused with Afrobeat – minus the “s” – which stems from 1960s Ghana and Nigeria; this genre utilizes a medley of West African music with North American Jazz and Funk. Afrobeat is popularized by Nigerian artist Fela Kuti.

Now, the more over-arching and contemporary genre of Afrobeats is described as West Africa’s pop music. While Nigeria and Ghana are the initiators of this revamped musical style, it was the city of London, England that was responsible for the ultimate propagation of Afrobeats throughout the western audience. In a 2012 article penned by Dan Hancox for The Guardian, he names London-based DJ Abrantee as the inventor of the genre. DJ Abrantee then clarified, “I cannot say I invented Afrobeats. Afrobeats was invented before I was born. It was invented by Fela Kuti. But what you’ve got to remember is the genre of music artists themselves are now producing — the likes of WizKid, Ice Prince, P-Squared, Castro, May7ven — are calling their music Afrobeats. So that’s what I call it when I put them on my mixtapes.”

Despite the fact that its rise in popularity is traced back to the mid-2000s, I argue that it finally made an impact on North Americans in the mid-2010s. Along with its distinguishable dance crazes in tow (Azonto, Shaku Shaku, etc.), Afrobeats made its name known through artists such as Drake, French Montana, Janet Jackson, Swae Lee and Kanye West – all of whom have worked with Afrobeats artists including the likes of Davido and Burna Boy.

Likewise, two of our favourite female rappers Cardi B and Megan Thee Stallion recently flew out to Lagos, Nigeria and Accra, Ghana on tour. Cardi B jumped on the remix of Davido’s hit “Fall” at the beginning of December this year, while Megan brought him on stage to perform his song “Risky” when she touched down in Lagos weeks later.

In conclusion, I would like to admit that New York is the main catalyst for modern-day Hip Hop, not to mention the abrupt emergence of the original disc jockeys that normalized sampling and the use of surround sound systems. Above all, some noteworthy DJs from that time are DJ Kool Herc and DJ Afrika Bambaataa from the South Bronx. At any rate, many will continue to deliberate the genuine origin of Hip Hop, but it remains undisputed that the foundations of all music lie in the beat.