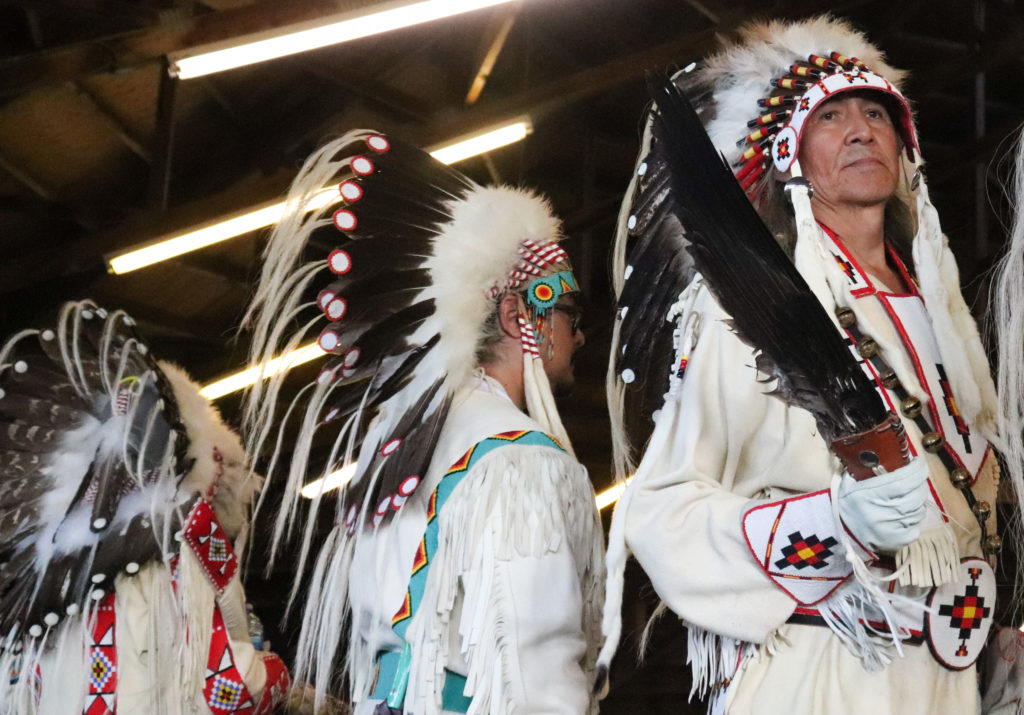 The annual Tsuu T'ina Pow wow on Friday July 26, 2019 near Redwood Meadows. Men from the traditional category wait in line during the grand entrance. (Photo by Kaley Ramage)

June 21st is Indigenous Peoples Day, a day to celebrate the First Nations, Metis and Inuit in Canada. Yet, most people still don’t know the history of the land on which they reside. Instead, Indigenous people often get asked what they need in terms of support. The answer itself can be straightforward, as long as people are willing to do the work as an ally. At the end of the day, it’s not up to Indigenous people to reopen wounds of colonial trauma in order for the outside world to become educated.

Doing things like renaming schools, sports teams and taking down colonial statues is great. But unless you’re telling the people watching why you’re doing it — and continue reinforcing it year after year — it doesn’t matter. For instance, the Calgary Board of Education finally changed the name of a junior high school from Langevin back to Riverside School after hearing the news that 215 children were found in Kamloops, despite students and teachers pushing for it to be changed for years prior. Hector-Louis Langevin help develop the original residential school system, which carries many holes about the past. This is why being directly educated about Indigenous communities and the issues they face is so important. These issues have been going on and still continue to this day. Therefore, 2021 should not be the only year the student body of what is now again called Riverside School, should learn about the importance of this change.

Indigenous people need allies to uplift their stories, voices and content. Most of Indigenous history has only been taught through the lens of all the bad that’s happened. Even though those topics are vital to the history of Indigenous people, presenting the beautiful sides of them is also just as important. That’s why it’s vital for allies to educate themselves in more aspects than just the trauma because Indigenous people are more than just victims of colonialism. There are over 500 Indigenous cultures on Turtle Island (Canada, United States and Mexico), and they all have different, beautiful aspects.

In 2008, The Truth and Reconciliation act (TRC) was implemented. This act cited a way to bring to light the truths of what happened during the residential school system era, and how it resulted in cultural genocide and generational trauma for Indigenous people. The residential school system wasn’t the only thing either. Cultural genocide happened through other things such as the 60’s scoop, a period of time where the Canadian government forcibly or without exact knowledge of parents adopted Indigenous kids out to white families. As well as through the high numbers of Missing and Murdered Indigenous Women and Two-Spirit people (MMIW2S). Even to this day, Indigenous kids make up a disproportionate number of kids in the foster care system. The TRC has many calls to action that impact Indigenous people positively. But as of today, only 10 of the 94 have been completed.

There are a number of ways to support Indigenous people. Visit www.native-land.ca  to learn all about the different Nations in Canada, including exactly what Treaty each is in. Also, find artisans in that area to buy from that are Indigenous, correct people when they say something wrong about the history, follow and listen to Indigenous people, and of course, never stop learning.